Let’s talk about the humblebrag

Academic Twitter had a wonderful and very entertaining festival on the #seriousacademic hashtag in recent days, in response to an (entirely silly, it must be said) anonymous post.

The post, to which I’m not linking as I think it has had too much oxygen already, is basically someone maundering on about how they’re a serious academic and not someone who wants to show off – or be made to show off – on social media.

Because that’s what we’re doing, people, when we’re on social media. Showing off.

A colleague and I were talking about the incident, and we both agreed that if we were given the chance to maunder on about something that we hated when it came to showing off, it would be the humblebrag.

Don’t know what it is? That ever-reliable source, Urban Dictionary, defines ‘humblebragging’ as “[s]ubtly letting others now about how fantastic your life is while undercutting it with a bit of self-effacing humor or ‘woe is me’ gloss”. It can be both a verb or noun. With the widespread use of social media, the humblebrag often lands in your stream on Twitter or Facebook.

Depending on your mood, you may chortle to yourself or want to reach through the screen and smack that person upside the head.

There is a humblebrag generator, of course (thanks, @academicssay, for the flag), which is good for getting a taste of various flavours of humblebragging. Just ignore the gender choice that may make you headasplodey.

Here are a couple of examples I’ve come up with that are relevant to that yet-to-be-recognised Olympic sport of academic humblebragging:

“Another book contract accepted! Really worried that the ms. deadline will clash with my keynote in Kyoto.”

“That’s three papers in a row accepted without revision this year! Maybe all that worrying I did paid off?”

“I wish the VC would stop nominating me for these awards. I’m running out of things to wear for photo shoots.”

“Hope this conference I’ve been invited to is worth the trans-Pacific long-haul.”

Do any of these seem familiar? The statements are a mash-up of things I’ve seen across social media platforms on others’ feeds over time, as well as statements I’ve heard academics say over the years.

I know of several colleagues who hate-follow their peers on various social media platforms precisely because of the shockingly good humblebragging that goes on in their peers’ feeds.

Aside from a bit of furtive self-auditing to check for one’s own tendency to humblebrag, it might be helpful to know that:

On social media like Twitter, humblebragging was negatively associated with being liked and being perceived as competent. Basically, people don’t like humblebraggers. Instead of self-promotion, humblebrags helped with self-demotion. (Harvard study: Humblebragging doesn’t work)

OK, so that wasn’t such a revelation – “people don’t like humblebraggers”.

What was a revelation to me, though, was the advice from several sources, which stated that a straight-out brag was ‘better’ than a humblebrag. Really? Why aren’t we just saying ‘no’ to bragging, saying ‘no’ even to “judicious bragging” (The humblebrag)?

Especially in a sector such as academia that’s rife with ego and entitlement, why give a free pass to any bragging at all?

With the humblebrag, it’s the dishonesty of framing a boast with seeming modesty that gets people irritated.

There’s nothing wrong with sharing your good news. Nothing at all. But when that good news is presented as ‘bad news’…it doesn’t sit well.

For example, I may have done a version of: “This commute to the continuing academic job of my dreams is killing me!” when I first started in my current role. If I did, I apologise. Very few get continuing academic jobs in areas they’re passionate about. People commute much further than I do. I need to shut up about my commute (and, yes, you can quote me on that, current colleagues who may be reading this).

Humblebragging showcases the privilege inherent in many people’s careers and their consequent opportunities. Increasingly, what used to be considered basic academic entitlements (such as funding to travel to, and present at, conferences) are no longer available to many, or have been turned into extremely competitive processes. What this means is that it’s often the early career and precariously employed academics who miss out because of what are considered to be inconsistent or yet-to-be established track-records.

So, enjoy your conference, celebrate your paper acceptance, dance around about landing that grant, and relish those travel fellowships. Don’t undercut it with false modesty, or project ennui because it has become a common experience for you. Many would be ecstatic to have just one of those chances.

10 August 2016: EDITED TO ADD this perfect-for-this-post comic by Poorly Drawn Lines (Reza Farazmand), which was flagged to me by my lovely colleague Liam Connell. 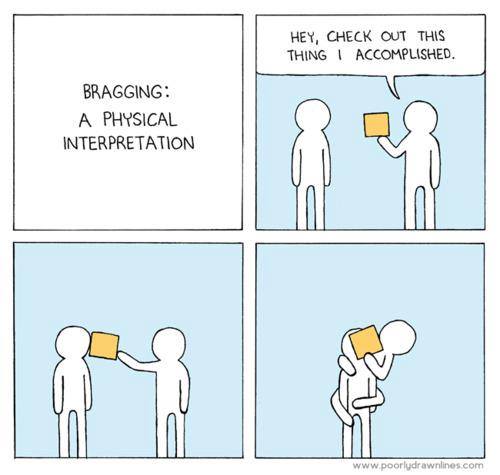