Social media: A tool for introverts 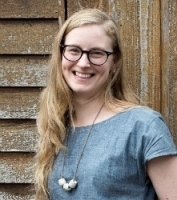 Sarah Hayes is an historical archaeologist who researches quality of life and social mobility in 19th-century Victoria through the lives, homes and rubbish of everyday people.

She has worked on two previous Australian Research Council projects, as a tutor, in consulting archaeology and in the management of moveable heritage in the museum and cultural heritage contexts.

Sarah tweets from @SarahHResearch, has a Facebook page Sarah Hayes – Historical Archeologist, and is on Instagram as historyfromthings. Her ORCID is 0000-0002-2144-3754.

My very first post on my Facebook page was seen by 130 or so people. I was in a cold sweat. This was terrifying. What if I spelled something wrong?

At first, I really wasn’t sure that the discomfort was worth it and I rather wanted to hide.

But, since taking up a DECRA award and effectively being employed by taxpayers, I felt that I couldn’t continue my research in a little academic bubble.

I knew I wanted to be able to tell more people about my research and, I suspected, this would in turn improve my research. I broadened my research communication strategies overall, and have even presented in a pub!

I’ve had a personal Facebook page for maybe 8 years, but rarely used it. In hindsight, I could have used my existing account and the post privacy settings to keep private posts private. But what I did was set up a dedicated page for my work stuff and it is kind of neat and tidy having a separate place for work content. There are also much higher upper limits for page likes than for friends. So, when I hit 5,000 followers, it won’t be an issue (ha ha – not likely).

Who exactly would these followers be? Initially, my followers were friends, colleagues and students. I was posting a mix of academic experience posts and stuff from my research. But my main motivation for using social media was to communicate my research to the general public. I started pitching my posts to anyone interested in history, archaeology or my research themes.

This decision can be a bit annoying because, sometimes, I want to post about stuff relevant to students or Early Career Researchers specifically. I now use the relevant Archaeology at La Trobe and La Trobe ECR Network Facebook pages for these posts.

The good thing about this decision was that it left me feeling that I’m curating a selection of content from my research.

This led me to Instagram. My work has strong visual elements (artefacts, heritage buildings, historical photographs) and lends itself very well to Instagram. Here, I only share my research and it’s where I have the highest proportion of non-academic followers.

Initially, I used the cross-posting feature so that anything I posted on Facebook would get on-posted to Twitter, but I found that people almost never clicked the link from Twitter to Facebook. So, now I mostly just do a separate tweet which sums up my point on its own.

And here lies, I think, the first great benefit of using social media. Each week, I am taking one small piece of my research, summarising it in fewer than 150 words, and then again in 140 characters. It’s an amazing exercise: getting to the heart of what you want to say quickly. The practice has helped me to improve my writing more generally (which, a couple of years ago, was factual, stuffy and dull) and get really clear about the point of my research.

My Facebook and Twitter accounts are also great for sharing the work of other archaeologists and historians: news stories, blog posts and other bits and pieces. What better way to build networks than to be sharing, liking and engaging with the work of others? Of course, this happens in person, too, but the reach is much smaller.

I’ve gotta say, it can still feel a bit uncomfortable to hit publish on a post but not as much as it did in the beginning. The second great benefit of social media? I recently rocked up at a conference where I knew no one, but then came a tap on the shoulder and an ‘I know you. I’ve seen you on Twitter’.  The introvert in me suddenly felt that all that posting was well worth it.

I also find it far easier to approach someone for advice or mentoring if I’ve engaged with some of their posts on Twitter or Facebook. Starting a conversation with ‘I saw your post on Twitter and I was really interested in…’ works well.

If I Google myself now (always fun!), my Facebook page is listed 5th and Twitter 9th. I had thought that my Facebook page would work nicely as a landing page for people looking me up but my feeling is that people actually go to Twitter to get a sense of what you are about, before even Googling you. I suspect that you really need your own website to bring together all your platforms and paint a better picture of yourself – and I’m in the process of building this now.

When my Conversation article was published in May, the fact that I already had a social media platform was clearly vital. It meant I could engage with retweets and Facebook discussions about my paper, and every producer who phoned me about an interview said ‘I saw in your Twitter stream…’.

Has all the effort to set up my accounts, write posts and embrace the discomfort of being out there in the world of the internet been worthwhile?