This is Part 2 of Brendan Keogh’s post about how he planned and ran an effective asynchronous, online conference.

As I said in Part 1, the crux of the event was pre-recorded videos and a Discord server.

Today’s post discusses several other elements that ensured it ran smoothly, and also takes a step back to consider what went well with the event and how things might’ve run better.

First up, the other elements that made sure the event ran smoothly!

Four times throughout the week I ran entirely informal Zoom calls with no agendas. These were scheduled to try to ensure every attendee would have at least one call at a not-terrible time. These were strictly optional and unprogrammed, with the sole intent of providing an opportunity for real-time discussion and putting a face to Discord usernames. With this aspect I wanted to simulate the line at the coffee cart at an in-person conference. Those random, happenstance discussions that are so valuable.

Not everyone attended these calls, and that was fine. Some logged on with screaming babies or while eating dinner or while walking the dog. That was great! Especially in late 2020, it was just nice to see people you didn’t live with.

Every day I sent an email to all attendees, reminding them of the day’s recommended viewing schedule, and reminding them to check in on the Discord, and of the time of the next Zoom catchup.

These emails, I think, concretised the event for those who were perhaps more busy with other tasks during the week. It reminded people what was going on, and drew people back in who otherwise may have disengaged two days in. It also helped add clarity to what could have been a very disorientating event with all its different platforms.

Finally, this symposium had one very special element that I am slightly hesitant to talk about as it is the only element that cost money, and it is slightly more resource intensive.

The workshop had its own bespoke online virtual space, The Zone, in which attendees could login and walk around a virtual QUT, watching the talks in different classrooms, chatting to other attendees who were logged on at the same time, or looking at a gallery exhibition of some of my DECRA’s research findings.

The Zone was created by Jae Stuart and Cecile Richard, who had together created a similar space for the Freeplay Independent Games Festival earlier in 2020. The underlying technical framework was designed by Paolo Pedercini, an activitist gamemaker who created the software to virtualise his own gallery space LIKE LIKE at the start of the pandemic. Since Pedercini made the software open-source, many creators have since used it to create all sorts of wonderful spaces.

What’s wonderful about The Zone is it proves that you don’t need virtual reality or fancy 3D graphics or cryptocurrency scams to make embodied online spaces work. A very simple pixel-art retro space where you click to move and type out chat is all you need to feel a sense of presence. It was a really lovely addition to the event.

I was able to have the Zone created by paying Jae and Cecile with the funds I was no longer able to spend flying out keynote speakers. Of course, you likely don’t have similar funds, or access to the technical skills to create such a space (though I can definitely recommend Jae and Cecile if they are looking for work). But while The Zone was truly wonderful and perhaps helped to ‘professionalise’ the event in some ways, it certainly wasn’t a necessary aspect of the event.

Ultimately, without the Zone, I think this sort of event still would’ve been as successful as it was. Youtube and Discord were still the crux of the event.

Ultimately, pre-recorded talks and a text-based discussion board is all you need for a highly collaborative and energetic asynchronous event. While it took some planning to set up and figure out how it was going to work, during the week itself things ran very smoothly with very little moderation work required from me (though it is worth noting this was an invite-only event).

People, for the most part, embraced the experimental format, and while there was some confusion before things got underway, once it started things clicked very quickly. People particularly appreciated the daily reminder emails and the recommended schedule (and all the emphasis that it was indeed just a recommendation).

The format ultimately met all its goals. It had the typical talks that all online and in-person events already have, but it also allowed much richer and multi-directional discussions than would have been feasible if we were all sitting on a Zoom call. People could break off into other strands, return to earlier points, start new conversations—exactly as we have all done in a conference lobby before the pandemic.

The lower workload, allowing people to continue their other work was also noted by many attendees as a positive, and greatly enhanced conversations and engagement.

Finally, the online format meant the event effectively archived itself. The videos are still available on Youtube. The Discord server still exists and, while it is quite quiet, people still occasionally share new research or job opportunities. The community persists.

There were three main issues with the format. The first, as mentioned above, is the format did not immediately make sense due to its unusual style. I sent a lot of emails in the weeks leading up to the event, and answered a lot of questions from confused speakers. One speaker pulled out entirely as they were already sick of pre-recorded presentations and saw them as useless. But, once things got underway, people got it pretty quick.

The second issue was a matter of scale. The initial in-person symposium would’ve been very small, fitting in a single room at QUT and requiring attendees to travel to Brisbane. I initially created the online event to be similarly small, but slowly invited more and more people because, well, why not? It’s online anyway. And, besides, not everyone was going to participate equally, so more attendees to balance out the lurkers was a good call. But this ultimately meant I never really decided on what scale of invite-only and fully-public the event actually was, which led to some awkward last-minute invites, and of people I completely forgot about. In person, the physical restrictions would’ve made this easy to explain away. For an online event, as an early-career researcher I was paranoid of offending senior people I didn’t think to invite. Having a better sense beforehand of the specific scale aimed for would have been ideal.

The third and most important issue was the inherent ambiguity of flexibility. As academics, we all know that flexible work is a double-edged sword. On the one hand, we have plenty of autonomy and flexibility in our work. On the other hand, our workloads are increasingly obscured behind funny money ‘metrics’ instead of units of actual time, so as to commit deliberate wage-theft against us, and almost all academics feel like they are working too much while achieving too little. This is exactly how flexibility is meant to work under capitalism: not empowering us to work when it is best for us, but obfuscating the full extent worked so even more value can be drawn from us at all hours.

The ’flexible’ and asynchronous structure of the workshop had a similar issue. Since people could participate whenever they wanted and as much or as little as they wanted, this inevitably meant some attendees felt like they were never participating enough. They would constantly apologise for not writing enough comments or for being ‘behind’ on the talks, despite clearly working as hard as anyone else. The exact same dynamics that play out with our ‘flexible’ work played out with attendee participation.

I truly don’t know how to address this in future events. One possibility is perhaps being even more explicit about the lack of pressure or need to actually comment. Not everyone asks a question at a conference! That’s fine. It’s good to just listen, too. Another possibility is to ensure participants that the Discord server won’t be immediately shut off, and there’s no problem if they want to contribute to a discussion a week or even a month in the future.

I’m thrilled to start attending in-person conferences again, see my old friends, and meet the new junior researchers I haven’t had a chance to stumble upon in the last three years. But I’m also going to miss some online events. Not the giant international conferences that still cost $500 but offered none of the networking or socialising opportunities, just the line on your CV. But the small, intimate, easily-international events that allowed us to collaborate across the world without paying the money, carbon, and health risks usually required.

There’s no reason not to continue doing online events, especially to continue including those colleagues for whom in-person events were never accessible. But at the same time, we need to resist the urge to just try reproducing the physical in the virtual. The virtual will never replace the physical, no matter what Meta says, but it can do something different. It doesn’t require expensive fancy technology to do it – just a bit of thought.

Pre-recorded content, an asynchronous text-based platform, an acceptance that no-one will dedicate entire days to an online event, and clear guidance via emails: four elements that together can create a strong, cheap, and simple asynchronous event. 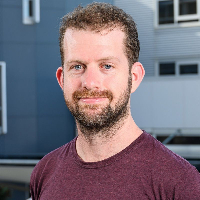 Brendan Keogh is a Brisbane-based academic and critic.

He works at the Queensland University of Technology where he is a Senior Lecturer in the School of Communication and a Chief Investigator in the Digital Media Research Centre. He has written about the art, industry, and culture of videogames. Brendan is on Twitter @BRKeogh, on Mastodon @brkeogh@aus.social, and has a personal website.